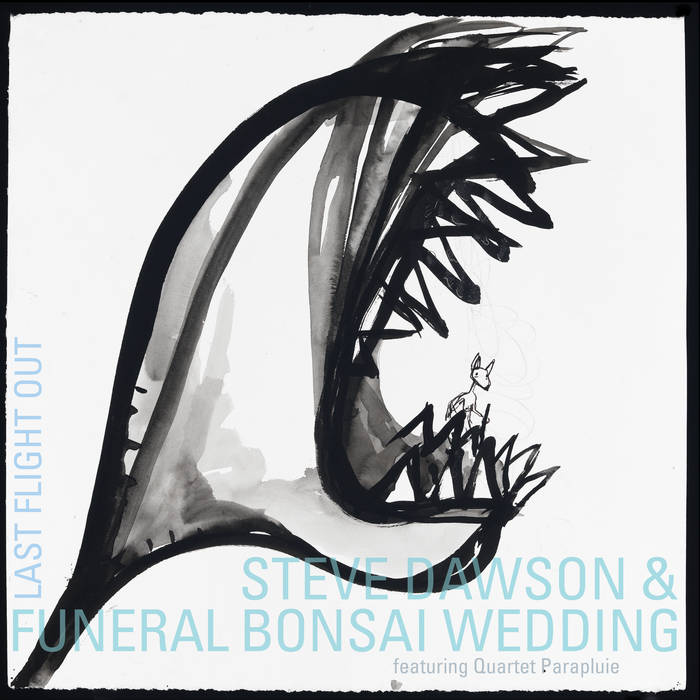 The idea of FUNERAL BONSAI WEDDING came to Steve Dawson while riding a bus in his hometown of Chicago. Every day he passed a florist with three windows, each with a sign. “Funeral,” read one. “Bonsai,” another. “Wedding,” read the last.

However random, Dawson realized the words sounded natural when put together, much like the group that would share its title. Indeed, when FUNERAL BONSAI WEDDING released its self-titled debut album in 2014, the collaboration appeared like it shouldn’t work. As the songwriter-singer behind Dolly Varden, an acclaimed Americana band from Chicago, Dawson’s roots are country and soul. He is joined by three Chicago jazz musicians — vibraphonist Jason Adasiewicz, drummer Charles Rumback and bassist Jason Roebke — known for their inventiveness on Chicago’s legendary free jazz scene, having participated in projects with people like Ken Vandermark, Ryley Walker, Thurston Moore, Nicole Mitchell, Jeff Parker, and Nels Cline, among many others.

Put together, the music of FUNERAL BONSAI WEDDING is unlike all of the above. On Last Flight Out, every sound is inverted: Adasiewicz’s vibes serve as the lead instrument, Dawson’s voice often leads to chants, and Rumback and Roebke shift time to move the music to side pockets as they move it forward. The closest comparison to the ephemeral blissed-out melodies is Van Morrison’s epic Astral Weeks, which aims for transcendence amid ordinariness. To reach those otherworldly heights, Dawson had to invert the process he was conditioned to within the context of a rock band.

“It’s all about the energy,” says Dawson of the group’s sound. “The way these musicians approach music is really different than the way most rock bands approach music. It’s about timing and the way they listen and respond to each other. Things are looser. There’s more spontaneity. In rock bands you learn a song and play it basically the same way. With these guys we nail down the basic structure but within that structure you have a lot of freedom.”

The musicians first played together in 2005 at Chicago’s Elastic Arts, a hothouse for experimental jazz. “It felt like I was floating,” Dawson remembers. That performance led to the group defining its sound in the studio and conducting a handful of shows including its debut at Constellation, a free jazz performance space and a summer performance at the Pritzker Pavilion in Chicago’s Millennium Park. After pausing for a few years, Dawson invited Funeral Bonsai Wedding to join him for a 2017 residency at the Hideout. By then original drummer Frank Rosaly had relocated to Amsterdam and was replaced by Charles Rumback. They were joined by Quartet Parapluie, an all-female classical string ensemble whose members have also moonlighted for groups like Belle and Sebastian, Iron & Wine, and Kanye West.

Afterward, everyone on stage knew what they needed to do next: Make a record and expand the scope of what FUNERAL BONSAI WEDDING could become.

This time out, Jason Roebke played a bigger role in writing the string arrangements to accompany Dawson’s songs, enhancing them in ways that made even the most downcast lyrics glow with beauty. “Jason added to the meaning of the songs. It’s pretty incredible. I had been playing with him for many years, but it shows me he’s paying attention to the full songs — not just his part, but the whole picture,” Dawson says. “It’s really wonderful.”

By shedding traditional song structures, and inspired by the open space created by his new collaborators, Dawson found himself gravitating towards more impressionistic lyrics, which happened to fit the surrealistic world that emerged since the last record. Those details creep into Last Flight Out through lyrics and moods that hover on the edge of both hope and despondency — A state that reflects the everyday news cycle. “The songs go unexpected places,” Dawson says. “I let my imagination go where it will. I didn’t try to confirm it to a traditional narrative.”

The first thought had to be best thought since LAST FLIGHT OUT was recorded in a single day at Kingsize Sound Labs in Chicago with John Abbey at the controls. The band was fresh from a headlining performance at Constellation and wanted to capture that energy in just a few hours.

For Dawson, the magic of FUNERAL BONSAI WEDDING comes from that blind trust. If Dawson hadn’t seen that florist window, if he hadn't agreed on a lark to improvise on a stage he'd never played, if he hadn’t decided to put his songs in the hands of musicians he barely knew at the time — He would have been stuck.

FUNERAL BONSAI WEDDING is the sound of starting over and not knowing what’s next until it happens.

All songs written by Steve Dawson
© 2020 All Rights Reserved
Is This The Best Use Of Our Time, Music, BMI
Administered by BMG

Steve Dawson’s new solo album tells a powerful story of faith lost and artistry reborn. AT THE BOTTOM OF A CANYON IN THE BRANCHES OF A TREE revisits depths that many of us have experienced in recent years and takes us to heights to which we all aspire.

Bandcamp Daily  your guide to the world of Bandcamp

Featured sounds by K.Spark and WIZDUMB, plus Basi joins the show to discuss his latest release.